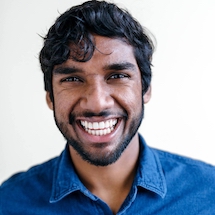 Dhruva Krishna is J.D. candidate at UCLA.  He is actively involved in their Intellectual Property Law Association (IPLA), South Asian Law Student Association (SALSA), and Entertainment Law Association (ELA) student groups.  Prior to UCLA, Dhruva graduated with honors from Carnegie Mellon University with degrees in Ethics, History, Public Policy and Professional Writing.  He is an avid and active musician, and spent time before his career in law performing, recording, and managing within the entertainment industry.

A fun fact about Dhruva is that a song he helped create is going to the moon!  While he was an undergraduate at Carnegie Mellon University, his school partnered with NASA to build a “MoonArk” to transport artistic and humanities-based work to the moon.  A single from the sophomore album of Dhruva’s band was selected to be one such work. The MoonArk is set to launch in the coming years.

Nitya Bhardwaj is a first-year J.D. Candidate at Loyola Law School. Currently, she is a 1L Representative for the Loyola’s Intellectual Property and Cybersecurity Law Association and for the South Asian Student Law Association. Prior to law school, she graduated from the University of Southern California with a B.S. in Neuroscience. This summer, she will be a litigation summer associate at Robins Kaplan LLP in Century City.

A fun fact about Nitya is that she is an avid and skilled violin player. For five years, she played violin for long-term hospital patients. The experience was mutually beneficial – she helped provide much needed comfort as she was able to learn the stories of a variety of people.

Meet Our Board: Vandana Kapur and Gopi K. Panchapakesan